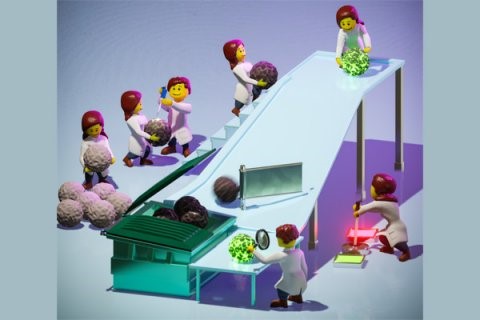 Catalysts are important materials that are used to increase the resource and energy efficiency of chemical reactions and processes. Although catalysts operate in cycles that normally restore their initial activity over and over again, they do deactivate over time. ICC Researchers at Utrecht University and University of Twente have now developed a powerful analytical tool that marks “dead” catalyst particles for deletion, complemented with a technique to physically remove them from a stream of particles. The results were published in Nature Catalysis.

The authors explain: “Because the deactivation of catalyst particles is a heterogeneous process, picking out the dead catalyst particles from a large catalyst volume is like trying to find a bunch of needles in a haystack.” Weeding out deactivated particles means that only active catalyst material remains, thus ensuring cleaner and more efficient chemical reactions and processes.

The researchers came up with a novel method to mark the catalyst particles that are still active. That method relies on the staining reaction of catalyst particles with styrene-derivatives. The molecules become fluorescent when they react with an active site in the catalyst particle, which means that active particles light up, and dead particles do not. The mix of stained particles is then fed through a droplet microreactor, where the particles are sorted using an electrostatic field in as little as 200 milliseconds.

Link to the UU press release.