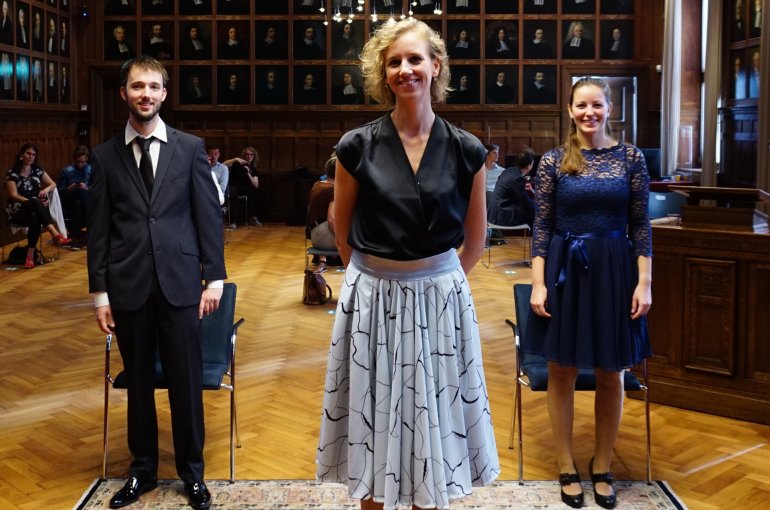 On 16 September Anne-Eva Nieuwelink defended her PhD at both Utrecht University and the University of Twente (UT). Her counterpart Jeroen Vollenbroek, who mainly did his research at the UT, already defended his PhD in January, but Nieuwelink’s defense had to be rescheduled due to the pandemic. The two researchers form the first MCEC Joint Doctorate between the universities of Utrecht and Twente.

“I was surprised to notice how easy it was to collaborate so intensively with someone from a completely different field,” says Anne-Eva Nieuwelink. “Jeroen is an electrical engineer, I’m a chemist, which means we almost didn’t speak each other’s language. But that went unexpectedly smoothly and was actually a lot of fun. And now, at the end of the ride, we’re paranymphs at each other’s PhD defence.”

Nieuwelink worked mainly in Utrecht, but also felt at home at the research group in Twente. “It really feels like a privilege to be so closely connected to a group at another university,” she says. “There were times when I took the train to Enschede twice a week with a bag full of samples, to analyse them in their lab.”

Originally Nieuwelink was supposed to defend her PhD in June, but in addition to a new date, the pandemic also means a new form for the defence: a hybrid PhD defence, with a limited group of attendees and a livestream. In principle, Utrecht researchers have priority to be present at the defence. Here, too, the strong bond with Twente becomes clear: “One of my opponents from Utrecht has given up his place so that my co-supervisor from Twente can be physically present at the defence. That feels very special, and I’m grateful for that.”

The theses by Nieuwelink and Vollenbroek proved a fine marriage between microreactor technology and catalysis. Each chapter is based on a collaboration between Prof. Albert van den Berg from the BIOS Lab-on-a-Chip group of the University of Twente and Prof. Bert Weckhuysen from the Inorganic Chemistry and Catalysis group of Utrecht University.

Please visit mcec-researchcenter.nl for more information about the MCEC consortium and catalysis research.