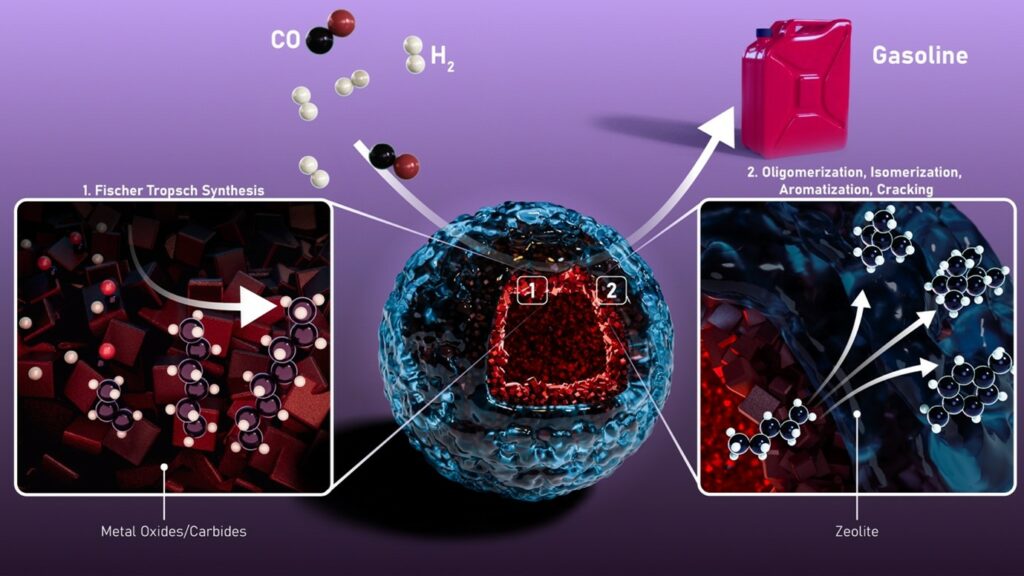 An important step towards a carbon-neutral society is making transportation fuels like diesel and gasoline from carbon-neutral carbon sources like biomass, waste plastic, and even CO2. Because diesel and gasoline have quite different hydrocarbon structures, combining these two functions into one catalyst material had so far eluded researchers. A team of researchers from Utrecht University and Xiamen University in China have now shown how to make core-shell hollow-sphered materials that combine the required functions in a single catalyst particle, enabling tandem catalysis with unsurpassed performance. The results are published in Nature Materials today.

Carbon-neutral sources, like biomass, waste plastic and CO2, can be converted into synthesis gas, a mixture of CO and hydrogen, which can be further transformed to transportation fuels with the so-called Fischer-Tropsch synthesis reaction. The latter system relies on metal-based catalysts that connect carbon atoms into longer chains, requiring zeolite-based catalysts to transform the resulting molecules into the correct product specifications. Gasoline molecules are much smaller than diesel molecules, for instance, but they also are more complex. Whereas diesel consists of long straight carbon chains, gasoline requires more compact, branched molecules and carbon ring structures. The researchers from Utrecht and Xiamen have now for the first time accomplished the difficult task of combining these two functions into one single catalyst particle.

Research leader Prof. Bert Weckhuysen explains: “We have designed a completely new route for the synthesis of these double-shell hierarchical materials for tandem catalysis. Our unique combination of advanced synthesis skills, high-range electron microscopy, and in-situ characterization tools allowed the level of control required. With these new materials and tools, we will be better positioned to tackle the necessary transition towards a carbon-neutral society.”

Although bifunctional catalysts systems are fairly common, the challenge in the design of new materials lies in the exact details of the material interactions at molecular scale. Conventional catalysts are made by just physically mixing the ingredients, which leads to non-uniform distributions and rather poor performance. The Utrecht and Xiamen teams now have developed a new synthesis method that relies on the formation of double-shell hollow spheres that combines an excellent interaction between the components in a system where the distance that molecules have to move between the different regions is well defined, and limited. The metal shell is assembled around sacrificial carbon spheres, onto which the zeolite shell is grown by seeded crystallization.

Link to the UU press release: