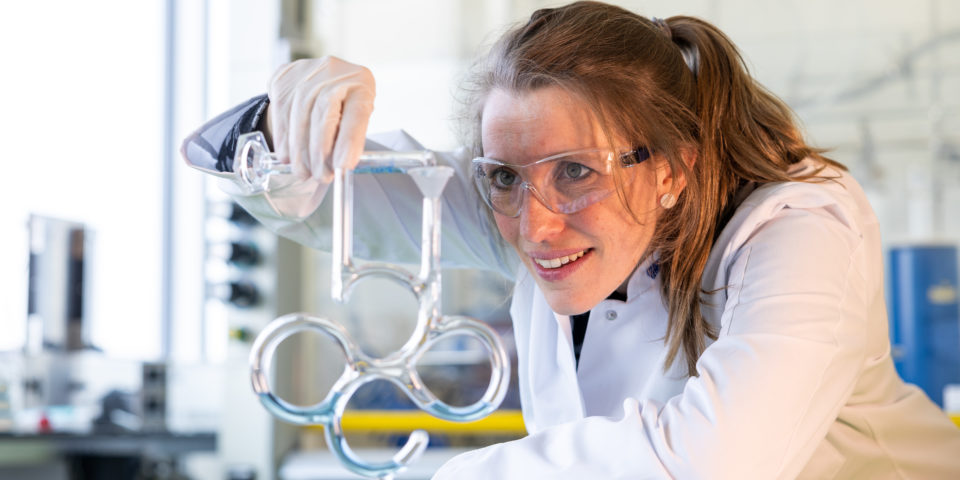 Companies and universities take a leading role in the development of sustainable chemistry, energy and materials.

Renewable energy and sustainable materials, such as coatings and catalysts, are one step closer now that the collaborating parties in the Advanced Research Center Chemical Building Blocks Consortium (ARC CBBC) will once again collaborate for five years on making the chemical industry more sustainable. AkzoNobel, BASF and Shell, together with the universities of Eindhoven, Groningen and Utrecht, are investing in developing a large international ecosystem in the field of research and development of green chemistry. The consortium has been supported from the start in 2016 by NWO (Dutch Research Council) and the Ministry of Economic Affairs and Climate in the Netherlands. As an open ecosystem the consortium is in search of extending cooperation with other national and international parties.

ARC CBBC directly connects top scientists in the chemical field in the Netherlands with the researchers of the affiliated companies and vice versa. Not only the research facilities of the universities are used, but also those of the companies involved are available. This shows that ARC CBBC is a partnership with enormous potential in the field of sustainability.

Breakthroughs
Over the past five years, research has already led to breakthroughs in the energy, material and feedstock transition. Such as smart processes for CO2 conversion and the use of biomass to make existing and new materials, such as coatings.

In the past period, joint investments have been made in a unique research infrastructure in the Netherlands that also distinguishes itself internationally. More than 59 top researchers, are now working within this program to make chemistry greener with room for 21 more research positions. This has already resulted in several patent applications and numerous publications in leading scientific journals.

Collaborating in an open ecosystem

Nobel Prize winner Ben Feringa, Spinoza Prize winner Bert Weckhuysen and top scientists such as Hans Kuipers stood at the cradle of the consortium. From the industry Shell, AkzoNobel and BASF S have committed themselves from the beginning to this important initiative with a shared ambition. According to the companies, long-term cooperation is of decisive importance   to be a solution that really contributes to the Dutch and European sustainability goals.

ARC CBBC is looking for partners who want to strengthen the research program  to increase its impact nationally and internationally.

Scientific director Bert Weckhuysen: “We are proud of the results achieved so far and pleased that the partners have committed themselves again for another five years. Only together will we make a difference. This is already evident. Full of energy, we are focusing on the next five years in which we want to invest further  to become the best-in-class science infrastructure in Europe with an important pioneering role in the field of greenification and circularity. As we are an open partnership, we are looking for even more cooperation with other parties.”

This year, the consortium was evaluated by an independent committee set up by the Dutch Research Council (NWO). This commission has once again underlined the potential of ARC CBBC and its great importance in a report. According to the committee, “the unique lab infrastructure, the profound collaboration between scientists and industry, the top scientists, the talent program for young researchers and the design of the multilateral research programs are key elements for innovation in the field of green chemistry.”

In the Advanced Research Center Chemical Building Blocks Consortium (ARC CBBC), founded in 2016, the companies AkzoNobel, BASF, and Shell and the universities of Eindhoven, Groningen and Utrecht are working with the support of the Dutch government and scientists from other academic institutions on far-reaching research to find solutions to counteract greenhouse gas emissions and create a sustainable society.

Sharing a common vision of sustainability, our new generation of scientific talent aims to build the chemistry for the future.

Note to editors (not for publication)

If you have additional questions or would like to interview one of the ARC CBBC scientists or PhD candidates, please contact: press@arc-cbbc.nl or Hannah Thuijs +31 6 41551476.