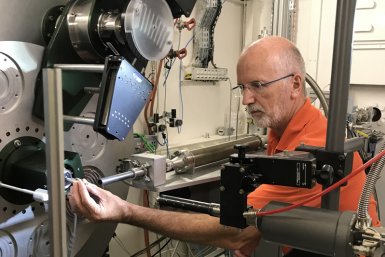 As of 1 August, Prof. Eelco Vogt is appointed as Professor of Heterogeneous Catalysis for Refinery Processes in the Inorganic Chemistry and Catalysis research group. Since November 2014, Vogt had been affiliated with the same research group as a Professor by Special Appointment, on a chair installed by Albemarle Corporation. His appointment was initially for a period of five years. In the evaluation last autumn, the committee was unanimously positive, particularly praising his contributions to education. In order to continue the collaboration with Prof. Vogt, his appointment is now converted into a permanent professorial position.

Vogt has an excellent international reputation within his field, and is leading in the field of heterogeneous catalysis for process technology within the refinery. Although catalysts are only present in small quantities compared to the reactants and products, significant quantities are needed worldwide. This often concerns catalysts containing metals such as nickel and cobalt in HPC catalysis, or rare-earth elements such as lanthanides in FCC catalysis, whose stocks are ultimately finite. Vogt’s research contributes to the important quest to find alternatives for these scarce raw materials.

Vogt is an excellent teacher with a lot of teaching experience, both at Bachelor’s and Master’s level. His students’ exceptionally positive assessments are particularly striking. Among other educational activities, Vogt will establish and coordinate a learning track called ‘Chemistry in context’, addressing various aspects such as ethics, social context, and career orientation. Because of his long experience in industry, he will also play an important role in career orientation for young chemists, ranging from students to PhD candidates and postdoctoral fellows.

Because of his industrial background, Vogt will also continue to promote connections between industry and the catalysis groups at Utrecht University, especially now that chemical processes need to become more sustainable and naturally circular. Within the university, the chair makes an important contribution to the research theme Pathways to Sustainability, specifically in the hubs Towards a Circular Economy and Society and Towards Industry with Negative Emissions.

Prof. Eelco Vogt studied and obtained his PhD at Utrecht University. He was awarded the KNCV Catalysis Prize for his PhD thesis. Subsequently, Vogt worked at Akzo Nobel Catalysts in Amsterdam and in Texas. Akzo Nobel Catalysts was acquired by Albemarle Corporation in 2004, where Vogt worked as, among other positions, Global R&D director Catalysts, Quality and R&D manager of Albemarle’s R&D center in Bergheim (Germany), and since 2014 as Distinguished Advisor Catalysts R&D. Since 1 August, Prof. Vogt is fully employed (part-time) by Utrecht University.