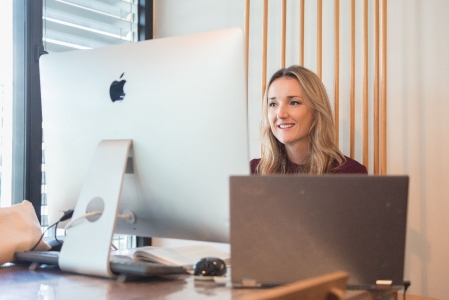 The PhD defence of Charlotte Vogt would take place on 18 March 2020. She had looked forward to that day for over a decade. After four years of hard work this would be the big day. The day she would be awarded her doctorate degree. But with 1 day to spare before her defense, everything got cancelled.

Dr. Charlotte Vogt of the Debye Institute had a vision on that one big day: “In the beautiful Senaatszaal in the University Hall of our university; a room clad from floor to ceiling with stately, oil painted portraits of over three centuries of Utrecht professors. The same room where my father got his PhD degree more than 30 years ago. I’d been planning this day for a good half year. Invited everyone who was important to me – friends would have been flying in from abroad. The beautiful Dom Church was rented off for the reception, and I wanted to have dinner with everyone who wanted to join the celebration in the techno club where the subsequent party would happen. It might sound stupid, or petty, but I’ve never really celebrated anything in my life. This was going to be a big day, at least for me.”

From flight cancellation to putting off the whole event

When the first news items on the Corona virus spreading in China in January of 2020, Charlotte’s  family, friends and herself started to joke about the impact it might have on my defence date. ”To be honest: I didn’t think that much of it, and decided not to worry too much. Until about a week before  my defence date, when my flight to the Netherlands got cancelled. I’ve been living in Israel for the past 1,5 years and I obviously had to get to Utrecht for the day. To cut a long story short, it was quite the adventure – or fight – to get to the Netherlands. When I arrived, we were still at the ‘we-Dutch-people-won’t-shake-hands-anymore’ phase of the COVID-19 precautions. But that changed. Fast. With 1 day to spare before my defence, everything got cancelled. First the party part, and later the whole event was cancelled all together. The trip back to Israel was even more bizarre.”

Once Charlotte finally got back home and finished two weeks of quarantine in her apartment in Tel Aviv, she received an e-mail from the beadle. “She asked me whether I wanted to postpone my defence indefinitely, or have a digital defence. I hardly ever have a difficult time making a decision. Normally I know what I want as soon as someone asks the question, but in this case, it took me an eternity – 3 days. I finally decided that I had to move on, with my career, from what it ‘could have  been’, and from this  part of my life in the Netherlands. I made a list of little sentimental things that were important to me about the day in the Senaatszaal, and decided I would try to recreate as much as possible.”

And so the new date was set: April 15 at 4:15 PM, and it would be a digital defence. Eventually the planning went on very quick. A few days before the defence date it was confirmed and then Charlotte fixed the logistics quickly. Her WiFi connection. And what to do about not having any dressy clothes in Israel with all the shops closed? And so on. Charlotte tells how it worked out: “I got ready, was even lucky enough to get one or two friends over to the house (at 2 m distance!), we got some snacks and had a nice bottle of champagne. I was a bit emotional before the defence to have to physically miss my best friends, and my family, who should have been there right by my side. My PhD defence itself went well, I believe. Although was a bit of a shame that we couldn’t have live discussions right after the defence with my defence committee as there were some interesting points raised.”

After the defence Charlotte’s promotor, Bert Weckhuysen, of course gave a speech. Dr. Vogt memorises: “It was a beautiful speech with the distinction of Cum Laude. It was a bit unbelievable to end such a meaningful period in your life with a 45-minute StarLeaf session. So it took a while for me to get adjusted to the idea that I am, in fact, now a Dr. but the realisation came eventually. This realisation came more from little things like changing my e-mail signature from MSc, to Dr., than the actual physical transference of the degree from Bert to myself, but I guess we are – and should be – the ones to decide for ourselves what is meaningful. My perspective on what really matters in life has definitely changed during this pandemic. Goes to show that nothing actually matters as long as you have the people you love around you (or on facetime). In the end, Corona made this day 100% different than what I’d dreamed of, but it turned out to be a beautiful day. And because of the digital nature of the defence I now have footage of the complete ceremony to keep forever.”