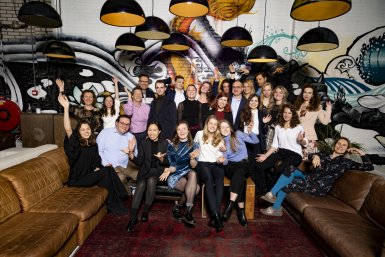 “Name something that is not the capital of France.’ Five bachelor students who were among the first to join the new honours programme Da Vinci Project, laugh looking back at their response to this ‘design thinking exercise’. Laura Knops: “We started to name cities and countries. But the answer could have also been ‘banana’ or ‘red’. It really showed us how much we tend to think inside the box.” Sabien van der Sluis: “One thing we learned is that there is no such thing as the right answer and that every answer can potentially be right.”

In 2019 Bert Weckhuysen, Distinguished Professor in Catalysis, Energy and Sustainability, received a Comenius programme Teaching Fellow grant. He used the funding to start an innovative interdisciplinary bachelor programme, together with his colleagues Appy Sluijs and Brianne McGonigle: The Da Vinci Project. Within this programme students of various scientific backgrounds work together on a sustainability related challenge provided by an external partner.

They were linked to BASF and were asked to find a way to dispose of their used plastic gloves in an environment friendly way.

“The group was very enthusiastic and had an open mindset”, reflects Jim Brandts, who was one of the student’s mentors at BASF. “Straight away we noticed the diversity of the team. Not just in disciplinary background, but also in character. You saw this reflected in the type of questions they asked. One of the inspiring things about the Da Vinci Project is that both scientific knowledge and soft skills can be used to find a solution to a problem.”

Sabien: “It really struck me that the second we got together we worked towards the same goal. Not to get a good grade, but actually to try to find something that could better the world. It brought us together very quickly, which made it very nice to work together.”

Laura: “First we had an idea for a glove separating machine, that would separate the gloves with chemicals on them from the ‘clean’ ones. But then BASF made clear that a machine was not what they wanted. They wanted us to figure out what to do with the gloves áfter they are separated. So somewhere halfway the project our perspective changed.”

Thijs: “Because we focused on making a machine we got tunnel vision. It was quite a waste to just stick to one thing and push out all the other options. After saying goodbye to the machine, we did still have to build a physical prototype. So we thought of a presentation where people had to scan a QR-code and watch the presentation on their phones. We then found out that there is a limit to thinking outside the box.”

Dineke: “You can get out of the box as far as you want, like with our QR-code, but how people experience it is essential. And looking at a phone while listening to a presentation turned out not to be an ideal combination.” Laura: “Both our client and Bert weren’t very enthusiastic, to put it mildly. They said we had to come up with something else.”

Thijs: “When we were restructuring for the next phase of prototyping we just got more confused every meeting.” Dineke: “At one point I thought we didn’t seem to fit together at all. We all shouted ideas, nobody was really listening and there was no focus.”

Irina: “We had a moment of complete despair. For several weeks we knew that we had to do something…but what?! We were afraid to start something new because we didn’t know which direction to go in. We took a break just before Christmas. We just had to let it sink in for a moment.

And after Christmas there was this burst of energy. It was striking how it became interesting again after losing hope. We regained interest in both the content and the form in which to present it.”

“Bert gave a motivational speech that made me believe we could do it.”

Dineke: “Bert gave a motivational speech that made me believe we could do it. The message was that it was ok to fail but to just try. It was good to see how resilient we became. We came in that Monday feeling like we had already failed and at the end of the meeting we were full of confidence to just make it happen.”

Thijs: “We ended up making a film in which we explain the supply chain and logistics of recycling the gloves. We advised BASF to hook up with other companies because just recycling the gloves you use as a single company, will take more effort than the benefits you get out of it. We followed Bert’s idea and made this theoretical process visible and understandable using Lego.”

Sabien: “If we had started with this idea from the beginning, we would have had more time to narrow it down more.” Dineke: “Basically it is just not finished. If we only had a few more weeks…”

Bert Weckhuysen: “Yes, ideally there would have been more time to walk through the process of iteration, where ideas go back and forth between students and client / professor more often before getting to the actual prototype. At the same time, you can’t endlessly keep iterating. So we will have to find the right balance. As tutors we were also newcomers in this exciting process. We might be ‘book smart’, but seeing what happens in practice is something else. In a programme like this, you have a lot less control over the outcome, which can be difficult for tutors who usually do like to be in control.”

“In this environment you feel capable of doing almost everything.“

Irina: “In the environment created for the Da Vinci Project you feel capable of doing almost everything. You are stimulated to get out of your ‘safe mode’ and just try things accepting the possibility of both failure and success. It is an environment in which you are free in a sense.”

Irina Yarulina at BASF: “Maybe you could say the route to the prototype was more important than the actual result. At the same time, we did indeed get some insight into how to handle the ‘glove issue’. Using the prototype, we will discuss the results with companies who collect separated waste. Perhaps, with them and with other companies using disposable gloves, we could set up a new flow of collecting and processing.”

Jim Brandts: “We thought it was a great experience to work with the students and we would definitely consider to join the Da Vinci Project again.”

Bert Weckhuysen: “The pride with which the students presented their ideas in the end and the way they clearly enjoyed working hard together, was heartwarming. Together they got through difficult moments, frustrated about not knowing how to proceed and in doubt about whether or not understanding their client’s wishes correctly. It wasn’t easy, but that ultimate moment they stood there together was truly wonderful to see.“