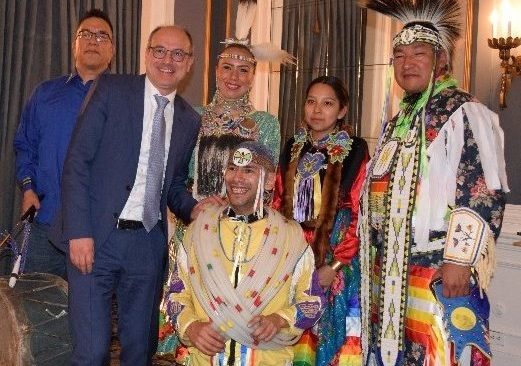 Bert Weckhuysen will receive the 2018 Robert B. Anderson Award for his outstanding contributions to the fundamental understanding of the functioning of solid catalysts and the related development of advanced microscopy and spectroscopy methods. The Canadian Catalysis Foundation awards the prize every two years to an internationally recognised leader in the field of catalysis, without regard for nationality, gender, age or location where the research was carried out. The Award consists of CDN$ 1500 and a travel budget of CDN$ 5000. There is also a lectureship associated with the Award.

Bert Weckhuysen will present two lectures at the 25th Canadian Symposium on Catalysis in Saskatoon in 2018; one educational one aimed towards graduate students and post-docs, and one plenary talk during the symposium. The Robert B. Anderson Award was formerly called the Canadian Catalysis International Award, but the Canadian Catalysis Division decided later on to name the award after one of its prominent catalysis researchers.

Bert Weckhuysen is Distinguished Professor at Utrecht University’s Faculty of Science. He received his Master’s degree in chemical and agricultural engineering from Leuven University (Belgium) in 1991. After obtaining his PhD from Leuven University in 1995 under the supervision of Prof. Schoonheydt, he worked as a postdoc with Prof. Wachs at Lehigh University (USA) and with Prof. Lunsford at Texas A&M University (USA). Since October 2000, Weckhuysen has been working as a Full Professor of inorganic chemistry and catalysis at Utrecht University (The Netherlands). The central research theme of the Weckhuysen group is the development of structure-activity relationships in the field of heterogeneous catalysis and materials science with special emphasis on the use of advanced spatiotemporal characterization techniques under realistic reaction conditions.

Weckhuysen’s research has been honoured with many scientific awards, including the Paul H. Emmett Award in Fundamental Catalysis of the North American Catalysis Society, the International Catalysis Award of the International Association of Catalysis Societies, the John Bourke Award of the Royal Society of Chemistry and the Spinoza Award from the Netherlands Organization of Scientific Research. Weckhuysen is also an elected member of the European Academy of Science, the Royal Dutch Academy of Sciences and the Royal Flemish Academy of Belgium for Sciences and Arts. In 2015 he was appointed Knight in the Order of the Netherlands Lion.