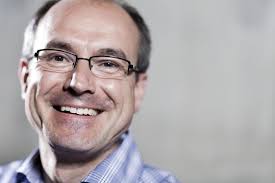 Bert Weckhuysen will receive the 2018 Robert B. Anderson Award for his outstanding contributions to the fundamental understanding of the functioning of solid catalysts and the related development of advanced microscopy and spectroscopy methods. The Canadian Catalysis Foundation awards the prize every two years to an internationally recognized leader in the field of catalysis, without regard for nationality, gender, age or location where the research was carried out. The Award consists of CDN$ 1500 and a travel budget of CDN$ 5000. There is also a lectureship associated with the Award.

Weckhuysen will present two lectures at the 25th Canadian Symposium on Catalysis in Saskatoon in 2018; one educational one aimed towards graduate students and post-docs, and one plenary talk during the symposium. The Robert B. Anderson Award was formerly called the Canadian Catalysis International Award, but the Canadian Catalysis Division decided later on to name the award after one of its prominent catalysis researchers.